National Day of Remembrance and Action on Violence Against Women

The Ontario Provincial Police and Community Safety Services invite you to attend the
annual National Day of Remembrance and Action on Violence Against Women Ceremony,
to commemorate the 14 women who were murdered at École Polytechnique
de Montréal on December 6, 1989.

KEYNOTE: Priscilla de Villiers is a leading Canadian advocate on crime
victim issues; she founded Canadians Against Violence Everywhere
Advocating its Termination (CAVEAT) after the abduction and murder
of her daughter by a sexual predator out on bail. She is the co-founder
and Executive Director of the Victim Justice Network (VJN) where her
work has played a pivotal role in raising public awareness, sharing 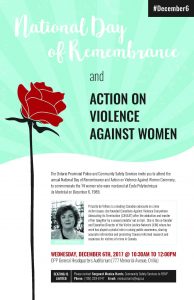 accurate information and promoting trauma-informed research and
resources for victims of crime in Canada.

Reserve your seat by emailing: monica.harris@opp.ca